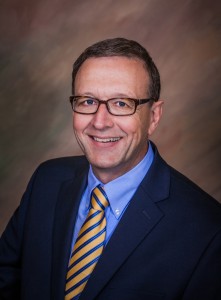 Dr. Wiessner is a graduate of Pacific University College of Optometry and long-standing optometrist in Walla Walla.

A native of Walla Walla, though his parents immigrated from Germany in 1954. His family only spoke German in the home and he first learned English when starting kindergarten. He attended Walla Walla schools and then Whitman College. With his goal set on becoming an eye doctor he transferred to Pacific University receiving a bachelor’s degree and in 1983 a Doctor of Optometry degree. Harry has an extensive music background as a pianist and church organist. His wife, Becky is a violin teacher, and violinist with the Walla Walla Symphony. They have two sons, both in practice with him at Vision Source. Family activities often center around playing music, including local bluegrass groups.

Dr. Wiessner is proud to be working alongside both his sons, Dr. Danny Wiessner, and Dr. Eric Wiessner here at Vision Source Walla Walla!

“I have used Vision Source for many years and they have always been great!”

You can schedule your next appointment with us online!